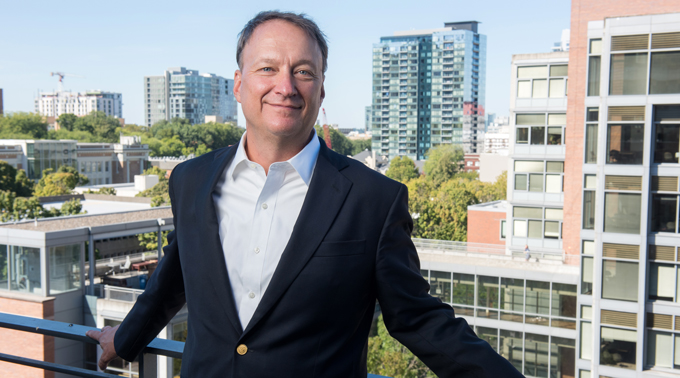 AS A TEENAGER growing up in Portland, David Bangsberg M.D., M.P.H., used to study in the libraries at Portland State University and Oregon Health & Science University. “My first college lecture was at PSU, and my first research job was at OHSU,” he says.

“When I graduated from Lincoln High School and left Oregon to attend college, I never imagined leaving forever. I thought I would go to college and maybe graduate school and then come back. But then one job opportunity after another kept me away.”

Bangsberg’s career has taken him to Boston, New York, Baltimore and San Francisco and abroad to England and Uganda. He was most recently director of Global Health at Massachusetts General Hospital, the largest teaching hospital affiliated with Harvard Medical School, where he was a professor. But in September, he returned to his hometown to become the founding dean of the new OHSU-PSU School of Public Health.

The school is a partnership between the two universities. “Each institution lists it as one of their schools,” says Sona Andrews, provost and vice president for academic affairs at PSU. “The students will get a degree from both institutions.” The arrangement is unusual—this will be the only joint school of public health in the country in which two institutions are equal partners, says Andrews.

“My first goal with this new school,” Bangsberg says, “is to help bring the faculties from the two universities together, so they feel that they can tap colleagues in other disciplines to create innovative approaches to public health.” OHSU, he says, offers expertise in biomedicine, biostatistics and epidemiology; PSU complements those areas with health policy, community health and urban health. “Where are the talents, and where are the passions?” asks Bangsberg. “And how do we best align those talents and passions with the greatest public health needs of Oregon?”

THE TWO universities committed to the creation of the OHSU-PSU School of Public Health in 2010. Elena Andresen became the interim dean in 2014, overseeing the school’s process of accreditation, which is expected to be completed in early spring 2017.

There are currently 1,443 students at the school; 1,233 are undergraduates, and about 210 are graduates. Bachelor’s through doctoral degrees are offered in such areas as health studies, biostatistics and epidemiology. A dual Doctor of Medicine and Master of Public Health degree is also offered.

According to PSU Provost Sona Andrews, faculty members of the new school deserve recognition for launching the joint effort. “To create a school that the institutions share, when the two institutions are very different, takes a tremendous amount of work,” she says. “This wouldn’t have happened without our faculty and the OHSU faculty.”

ALTHOUGH Bangsberg has extensive experience working on public health issues around the world, the emphasis of the new school will hit closer to home. “A school of public health in Oregon should focus first and foremost on the health needs and health disparities of Oregonians,” says Bangsberg. “The school is supported by the state, so it should serve the state as its first priority.”

Oregon, he says, has many significant health challenges, including substance abuse, suicides, mental health, under-activity, over-nutrition, obesity, cardiovascular disease and cancer. “There are challenges related to access, education, and economic opportunity. Portland in particular has struggled with issues around homelessness. All of these are important to Portland, and to Oregon, but they’re also issues that are important to the U.S. at large.”

And, while the focus of the school is on Oregon, Bangsberg says that he will be open to wider outreach. “In every university across the country, there is a new generation of young people who grew up in the Internet age, who are aware of what global health disparities are, and who have a real passion to make a difference. With my experience in global health, I can make connections and create opportunities for the students and the faculty.”

BANGSBERG has personal experience in following a passionate belief. “When I first went to medical school, I was pretty certain I wanted to study basic neuroscience and be a brain surgeon. I had a full M.D./Ph.D. scholarship at Johns Hopkins, which paid for my tuition and living expenses.”

But at the time, HIV was raging through East Baltimore. Marginalized populations, including gay men and injection drug users, were particularly devastated.

“Seeing public health and health disparities through the lens of Johns Hopkins Hospital in East Baltimore, I said, ‘These issues can’t be ignored, and they’re what I want to focus my career on.’”

He left the Ph.D. program, giving up the scholarship that went with it, so that he could start addressing HIV in gay men and injection drug users at a free clinic in Baltimore. After Johns Hopkins, Bangsberg moved to New York City (“the only place where you could find more HIV and structural violence than East Baltimore”) and then to San Francisco (“because that was the Mecca to study HIV”). He went on to work on some of the same issues in rural Africa while a professor at Harvard and director of Global Health at Massachusetts General.

Now, he says, he will apply that same broad lens to guide the OHSU-PSU School of Public Health through its examination of health disparities in Oregon. “I have a lot of faith and a lot of optimism that we’ll come up with really creative solutions. And I look forward to discovering those, in partnership with not only the faculty, but with the students and the staff as well.”

Stephanie Argy is a graduate assistant in the Office of University Communications.